Venue: Hilton Hotel, Rotterdam, The Netherlands.Follow the meeting on Facebook.

The 2019 Nautilus International General Meeting (GM) was held in Rotterdam in 8 to 10 October — under the banner ‘Global Industry, Global Workforce, Global Union'.

Nautilus International members can still watch a selection of video clips from the General Meeting via  its private Facebook group.

The GM is a conference where you can share your views on the shipping industry and the issues that directly affect you at work, network with fellow seafarers and meet influential figures from the world of shipping and beyond.

The 2019 GM was held at the Hilton Hotel in Rotterdam — with members assembling on the evening of Monday 7 October and departing on the morning of Friday 11 October 2019.

The conference featured a lively programme of presentations, debates, and speeches from a few leading maritime and trade union figures.

The Union encouraged attendance from lay reps and full members, as well as potential guest speakers and exhibitors and sponsors.

Members attending were given relevant schedules and reports via an app at the meeting. All members can also log in and find further meeting resources on the General Meeting Resources page (log in only)

There was also a great line-up of speakers at GM 2019.

Guy Platten (left), the secretary general of the International Chamber of Shipping, was the keynote speaker on the first day of the conference.

Han Busker, the president of the Netherlands trade union confederation FNV, Jim Scorer of the International Federation of Ship Masters Associations, and Paul Novak of the TUC addressrf the meeting on Wednesday.

On Thursday, as part of a day focusing on the longer-term vision for the Union and the industry, ITF general secretary Steve Cotton spoke, followed by Dr Cleopatra Doumbia-Henry, president of World Maritime University and 'Mother of the Maritime Labour Convention'.

A selection of video clips are still available for viewing on the Nautilus Facebook private members' group page.

Lots of information and updates from the conference was shared on our social media channels during the conference – look for the hashtag #NI_GM19 for the latest from the Union and guests at the meeting. 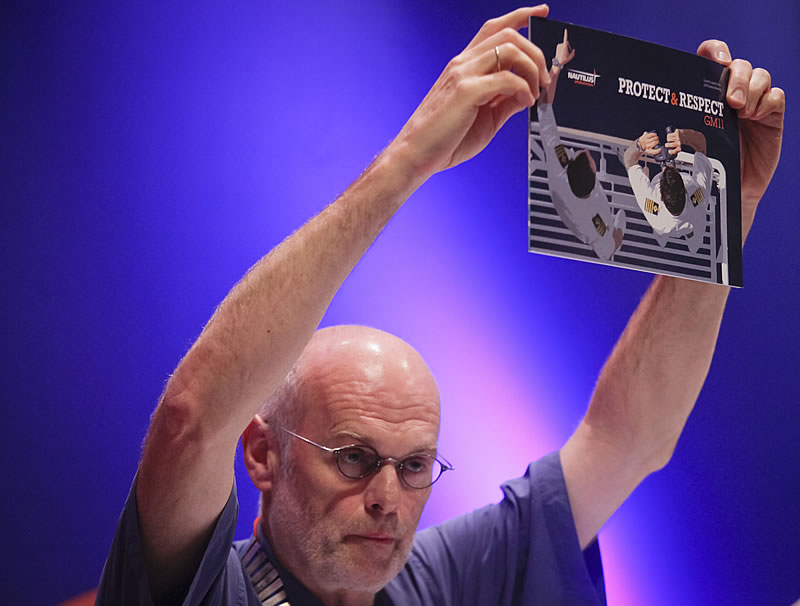 Notice is hereby given under Rule 28 that Council has determined that the 2019 Nautilus Rules General Meeting will be held at the Hilton Hotel, Weena 10, Rotterdam 3012 CM, on Wednesday 9 October 2019, commencing at 1700hrs (or to follow the day’s General Meeting business).

Under Regulation 10.3 full members may submit proposals for changes. Such proposals from full members must be submitted in writing, signed by at least four full members in benefit and reach the General Secretary at Head Office by no later than 1700hrs on Friday 5 July 2019.

By decision of the Council of Nautilus International, notice is hereby given that the 2019 Nautilus International General Meeting will be held at the Hilton Hotel, Rotterdam, from Tuesday 8 until Thursday 10 October 2019. The meeting is due to commence at 0930hrs on Tuesday and finish with a gala dinner on Thursday 10 October, with guests departing the hotel on the morning of Friday 11 October.

Members wishing to move motions at the meeting had to submit them in writing, signed by at least four full members whose contributions have been paid up, to reach head office by no later than 1700hrs on Friday 5 July 2019.
Financial assistance for travel and hotel costs may be available on application to the Union. For further information, email Adele McDonald at conference@nautilusint.org.

Full members needed to register before the closing date on 30 August 2019.

Registration has now closed Motions will be available in members area

Full members could have an input into the General Meeting by submitting a motion by Friday 5 July 2019. The Nautilus General Meeting is the Union’s most important policy-making forum — a conference where members can debate the developments that affect them at work and decide on the policies and priorities that Nautilus should follow to address these.

A full list of motions is available for members by logging in to the Membership General Meeting resources page.