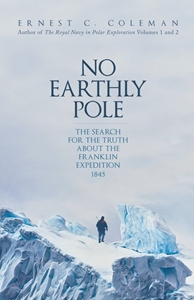 In No Earthly Pole, Coleman is ‘determined to set the record straight’ as he sees it. Through recounting his own forays into the world’s bitter north, he seeks to highlight the endeavour, determination, labours and pains of men to benefit the rest of humanity by the establishment of a water passage from the Atlantic to the Pacific.

So much has been written about the ill-fated journey Franklin and his crews took to plot the North-West Passage that it has seeped into the popular consciousness. Theirs was a quest that had consumed some of Europe’s most accomplished mariners for almost four centuries. It was an obsession that chipped away at European understanding of North America’s extremities, sometimes at great cost to both vessels and lives.

And although the Franklin expedition was the best-equipped assault on the Passage launched at that time, its two vessels disappeared after sailing north from Baffin Bay. None of the men were ever seen by westerners alive again.

Many theories have been put forward for their demise. Rescue missions turned up tantalising clues: an abandoned sled, personal effects, letters from the crew, and two skeletons. But to this day the fate of Franklin himself remains unknown.

In Coleman’s opinion, some of the theories surrounding this ill-fated expedition have been shaped by political bias – taken over by academics and politicians both for questions of Canadian sovereignty and academic advancement. The author is scathing of these ‘closed-minded’ philosophies, which he says come at the cost of both Franklin and the Royal Navy’s reputation. ‘That they did not succeed was not the fault of poor leadership, incompetence, foolhardiness, vanity or impracticality,’ he says. ‘Their misfortune was nothing more or less than the unpredictable conditions of environmental adversity.’

A Royal Navy man himself, Coleman knows about environmental adversity. The first part of this 350-page hardcover book is dedicated to his explorations of the Canadian Arctic in search of surviving evidence from the 1845 expedition. In it he chronicles the sheer scale of that task in the world’s most extreme climate. There are mishaps and misadventures and the consequences of poor planning and bad judgement. Coleman may be a hardened adventurer in the vein of his hero Franklin, but he is no match for an Arctic summer storm nor immune to starvation.

The second part of the book is an examination of the ‘misinformation that carried with it the disparagement and tarnishing of a great enterprise and the sullying of the memory of those who died whilst trying to survive it’. Coleman’s hypotheses might raise a few eyebrows in academic circles – exactly as they are designed to do. With images from his expeditions, including detailed maps and archaeological finds, No Earthly Pole certainly achieves its goal to speak out in opposition to those who have learned their history from textbooks, written by scholars who were in turn tutored by yet more books rather than first-hand experience of adversity. For Coleman, this type of learning has closed minds to the achievements of both Franklin and the Royal Navy in the Arctic. His lived experience could very well open some minds to a revised, more positive narrative of those early explorations and open a path to different types of
studies in future.

The introductory pages of this new edition contain a list of some prominent heavy lift casualties and incidents over the past 40 years which serves to underline the importance of this excellent guide to the safe movement of large loads and successful lift operations.

A wife on the ocean wave is a memoir of Carole’s early years of marriage travelling the world, taken from diaries and letters written to parents over a five-year period.