The motion was part of a major Europe-wide campaign by the European Transport Workers Federation (ETF) against poor working conditions and social dumping in the transport industries.

Social dumping is a practice of employers to use cheaper labour than is usually available at their site of production or sale by using migrant workers or moving production to a low-wage country or area.

The campaign has been organised ahead of European Parliament elections in May 2019 – and it includes a Fair Transport manifesto calling for politicians to prevent European transport workers from being undercut on pay by workers from other countries, to tackle dangerously long working hours and the use of short-term contracts. Protests are planned in the ports of Antwerp, Rotterdam and Hamburg.

The ETF Fair Transport campaign will see unions stage more than 100 different actions in at least 18 different countries this week to highlight the damaging effects of unfair competition and social dumping in the transport sector.

As part of the action week Nautilus Swiss branch staff also held an awareness day on Monday 25 March for national media - who heard about the state of negotiations for better working conditions with Swiss river cruise employers. Nautilus is keen to work with companies to organise binding agreements on working conditions from 2020. 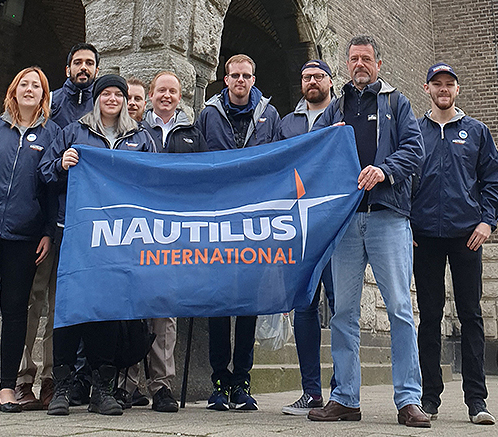 Conference commends the transport unions and the European Transport Workers’ Federation (ETF) for their work since that time, bringing to people’s attention the poor conditions that continue to plague workers in the transport industries – and in shipping in particular.

Young maritime professionals - and young transport workers throughout the transport industries - are disproportionately affected by low wages, poor conditions and precarious work, with many workers embarking on their careers believing that these issues are part of everyone’s working lives.

Conference therefore congratulates the ETF for coordinating a day of action on 27th March 2019 and sends solidarity to Nautilus International members making their way directly from this conference to Brussels. They will be joined by members of transport unions travelling across the continent this week to highlight the common issues faced by transport workers in Europe.

Their demands for effective action to eradicate exploitation and for the safeguarding of decent jobs and quality training are supported by this TUC Young Workers’ Conference.

Swiss river cruises boom at the expense of employees