Home News & insight Ships of the Past Cunard Adventurer 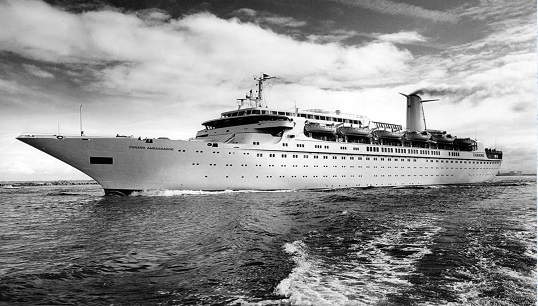 The 14,155gt vessel was of 148m length overall and had been designed specifically to enter otherwise inaccessible ports in the Caribbean, with a particularly shallow draught of 5.8m (19ft 2in). The Adventurer was powered by the first Vee-form TM 410 Stork Werkspoor diesels to be built for e application.

Originally destined for the Panama flag, Cunard had to make a series of significant changes to gain a UK Class I passenger certificate. These developments included improvements to fire insulation, fire detection, the integrity of watertight bulkheads and separation of cold from dry stores.

The Adventurer originally had a crew of just over with the capacity to hold up to 832 passengers. Following a major refit in Bremerhaven, radical changes were made to the funnel with a reduction in passenger capacity.

In December 1971, the Adventurer departed on its maiden voyage from Southampton. Before departure, Trafalgar House Group's managing director Victor Matthews gave a speech onboard stating that the Adventurer and its sister ship Ambassador were a signal that the company intended to stay in shipping.

The Adventurer served as a cruise liner across Alaska and the Caribbean in the 1970s before a change in ownership. After the refit in Bremerhaven, it resumed Caribbean cruising until 1991 when it was deployed for Mediterranean cruises after being purchased by Greek operator Epirotiki Lines.

The last cruises the Adventurer embarked upon were Aegean and Mediterranean cruises until the end of the 2011 season.

The Adventurer and sister ship Ambassador were the first Cunard ships built for cruising. They were also the first ships in the 20th Century passenger fleet with a name that did not include Queen or end in 'ia' or 'ic.'

The naming was significant, as Cunard's new owner Trafalgar House Investments wanted to use the naming to demonstrate its future shipping intentions. During his speech, managing director Victor Matthews made clear that the property firm intended to stay in shipping, announcing that it was considering enlarging the passenger fleet to six ships.

Where was the Cunard Adventurer built?

The Adventurer was built in the Netherlands by the Rotterdam Dockyard Company.

How many name changes did the Adventurer have?

How big was the Cunard Adventurer?

When did the Cunard Adventurer finish operations?

The Adventurer had originally been a part of an eight-ship order for the US company Overseas National Airways. However, financial issues meant that Trafalgar House took over the project and cut the order to just two ships.

The Adventurer and Ambassador were the last two cruise ships to be constructed in the Netherlands. After five years with Cunard, the Adventurer was sold to Norwegian Cruise Line in early 1977. The Ambassador was converted into a sheep carrier following a devastating fire in 1974.

After the refit in Bremerhaven, the Adventurer was renamed Sunward II and resumed Caribbean cruising. The vessel operated successfully for Norwegian Cruise Line until the company decided to modernise its fleet in 1991, selling the Sunward II to the Greek operator Epirotiki Lines.

Although Louis Cruise Lines planned to give the ship new life, Coral was finally sold for scrap at the end of 2013. It was broken down at Alang, India, in early 2014.