Autonomous shipping is the hot topic in the maritime world, but what exactly do we mean by 'autonomous', and what’s in store for seafarers over the coming decades? Experts gathered at a conference in the Netherlands in the summer of 2018 to give  their views and share the latest technological developments. ALLAN GRAVESON reports…

The AMI Conference Centre in Amsterdam provided a fabulous venue in June 2018 for three world class events: the Autonomous Ship Technology Symposium; the Hybrid Expo; and the Maintenance Expo.

Three designated conference stages and a centre presentational stage in two massive halls offered an insight into ship technology available today and in the future.

The Autonomous Ship Technology Symposium was the main forum at the conference for discussing the technical, operational and indeed philosophical challenges surrounding the move towards autonomy. Spread over three days, the symposium featured a range of expert speakers and offered several opportunities for well-informed debate.

Michael Rodey of A.P. Moller-Maersk provided an insight into the future direction of autonomous shipping. He made it clear that unmanned operation was not on the horizon. Paivi Häikkola of Autonomous Maritime Ecosystems then told how his company intends through research to address issues including remote piloting, connectivity and 'industry approved' levels of autonomy.

In a powerful presentation, Raphaël Fabian of Rolls-Royce Belgium said a degree of autonomy linked with remote as a fall-back could reduce the impact of human error on a range of vessels, but the workforce would need appropriate skills.

Reduced workload and working hours could be a benefit of the technology consistent with an ethical approach to automation.

He stressed the importance of soliciting workforce and union views to dispel misconceptions. Change would be slow and progressive, with most of the present workforce finishing their employment as they would normally have.

Dr Kalevi Tervo of ABB Marine Finland provocatively pointed out that automation was already taking place before many players realised what was happening. However, there has been a clear pulling back from the unmanned concept. The integration of systems to improve situational awareness was where greatest progress could be made relatively quickly, and it is possible we will soon see a periodically unmanned bridge in automotive mode on ocean passages.

The keynote presentations were followed by a panel discussion during which it was acknowledged that the business case had been made for autonomy on small vessels (ferries) in coastal waters. However, the general desire in the case of larger vessels was not to unman, but for personnel to revert to an onboard safety role.

It was notable that there was no seafarer representative on the panel. A worrying statement from a panel representative relating to seafarers – 'You need a master, either afloat or ashore, to take responsibility' – surprised some but not all the audience. The statement demonstrates the lack of forward thinking on this issue and prompts the question as to why the shipowner or DPA should not be responsible. Also of concern was when a panel member asserted without evidence that the ITF was supportive of autonomous shipping.

In this session, Dr Henry Robinson of H Scientific Ltd said that in some instances, a high degree of autonomy was both economic and arguably desirable, e.g. small survey vessels with relatively large crews undertaking routine work. In other cases, the use of the new Lidar technology (3D laser scanning) would assist onboard crews with improved situational awareness and collision avoidance.

Adam Ehart of Textron Unmanned Systems traced the development from unmanned aerial vehicles to unmanned vessels for the US Navy, and Andrea Morgante of Wärtsilä drew attention to the longstanding existence of unmanned enginerooms, stressing that seafarers should not fear new technology.

Hans-Christoph Burmeister of the Fraunhofer Centre for Maritime Logistics explained the FernSAMS research project into remotely controlled tugs. On a scale of 0=blue sky to 9=commercial, about 6 has so far been achieved – but, he argued, a solution to line handling needs to be found before further progress can be made.

In this session, Dr Tim Barton of Leidos presented work on the design, build and demonstration of Sea Hunter for the US Department of Defense, which applies automation to landing craft. He stated that the operation of the collision regulations was 'done technology'.

Russ Miles of Guidance Marine (Wärtsilä) identified the use of sensors for position fixing and collision avoidance, and Ralph Dodds of Atlas Elektronic UK explained how the increasingly complex data available to operators could be presented in a 3D visualisation rather than a series of flat screens. Dino Mandic of SailRouter described a wave recognition system that computes wave height, the signifi cant wave period and angle of encounter as a self-awareness system for autonomous ships.

Professor Etsuro Shimizu of Tokyo University of Marine Science and Technology described the operation of a wireless LAN and a mobile phone network as a low-cost communication method between a small boat in confined waters and a remote onshore station. Erik Evjen Hovstein of Maritime Robotics added that for such vessels the human was better ashore – i.e. safer and more productive.

The general desire for larger vessels was not to unman, but for personnel to revert to an onboard safety role 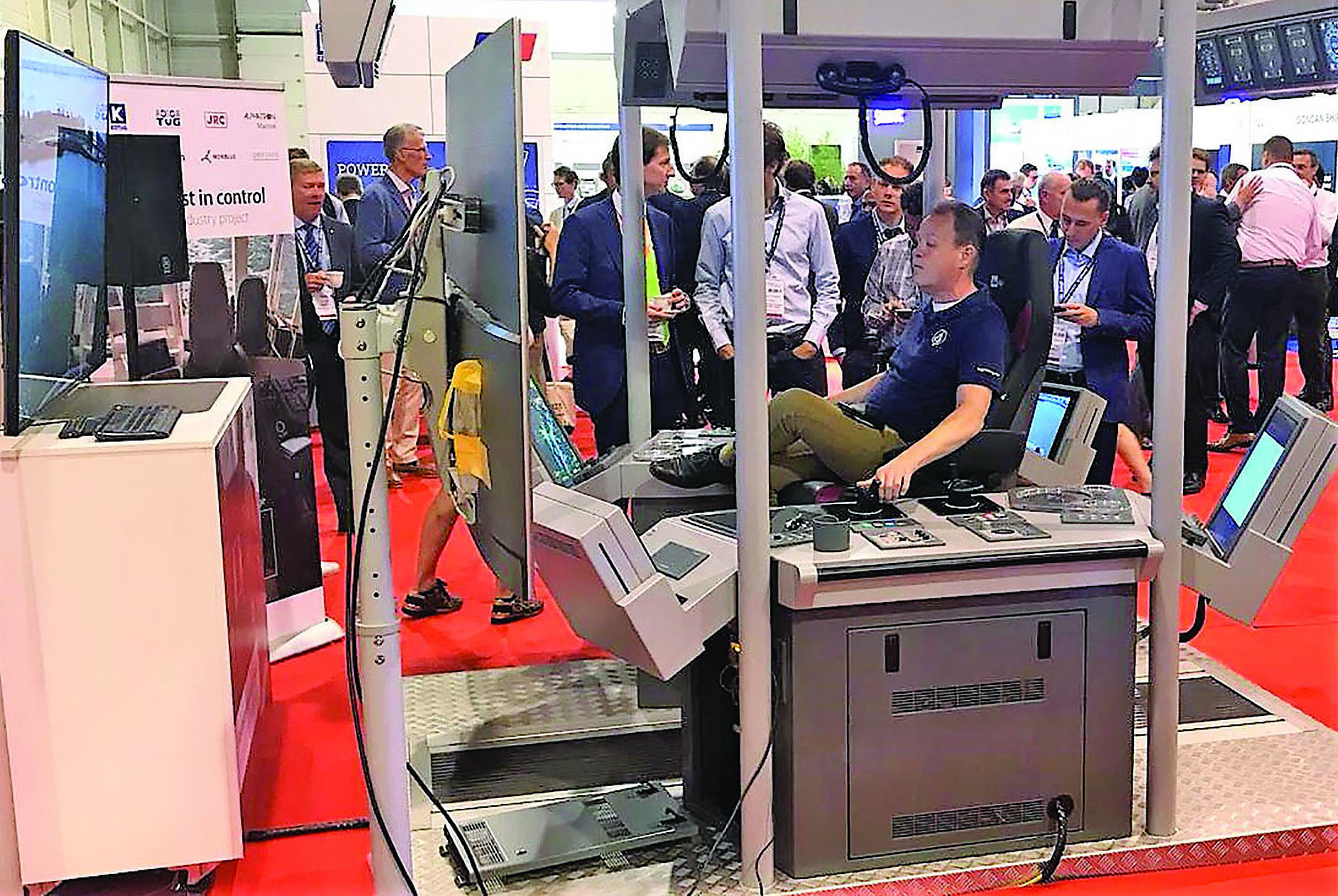 The Dutch towage company Kotug has staged what it claims to be the first long-distance remote-controlled operation of a tug – driving the Rotterdam-based Rotortug RT Borkum from a special control console 1,200km away in the south of France, pictured.

The company set up the remote command station at the ITS trade show in Marseille, enabling a Kotug captain to pilot the tug using a secure internet connection, video camera feeds and a duplicate bridge console.

Kotug said it believes remote controlled vessels will be the first step to autonomous shipping and, combined with drone technology to connect the towline, it argues that unmanned operations are increasingly viable from the commercial and technical point of view – although the regulatory regime will need to change.

Dr Sauli Ahvenjärvi of Satakunta University of Applied Sciences considered the all-important issue of the interaction between manned and unmanned ships.

This presentation appeared to find problems where none existed – overlooking the obvious solution of unmanned giving way to manned, like steam giving way to sail. Instead he considered that a move beyond the present regulations for preventing collisions at sea to a more automated system of collision avoidance was necessary.

Professor John Cross of the Marine Institute of Memorial University presented work undertaken with Gordon Meadows of Southampton Solent University into the IMO STCW competences for chief engineer. It was advocated that a new sub-set of skills was required for AI ships. There would be less 'hands-on' work and more 'monitoring', hence the role of officers would change. In questions following the presentation, the researchers acknowledged they had not evaluated ETO competencies.

Christer Baltzersen of Inmarsat Maritime spoke about Fleet Express, a system of new satellites for a rapidly developing digitalised and automated society, while Dr Sewon Kim of Daewoo Shipbuilding and Marine Engineering spoke of developing a 300TEU autonomous ship which, if successful, would be the first truly autonomous trading vessel. Taking off the onboard accommodation has considerable implications for fuel efficiency, he pointed out.

In this session, Ann-Sofi e Pauwelyn of De Vlaamse Waterweg outlined an intended framework for automation research and trials on 1,076km of inland waterways in Belgium and the Netherlands, commencing in 2020. More information is available at www.vlaamsewaterweg.be/smart-shipping.

Aditya Nawab of Robosys Autonomous Unmanned Systems outlined the development of onboard systems to avoid obstacles in narrow channels and waterways.

The symposium ended with presentations given by legal and industry representatives: Iiro Lindborg of Rolls-Royce; Bjarke Holm Hansen of CORE Advokatfirma; Mark Johnson of Reed Smith; and Sean Pribyl of Blank Rome LLP.

It was noted that the UK has now registered an autonomous vessel and the market is providing insurance to this sector.

There are still considerable issues to address – not least the responsibilities between ship and shore and between human factors and technology.

Academics and lawyers will be kept occupied for years to come. In the absence of specific regulation, it was agreed that autonomous should give way to manned, as powered gives way to sail. As with hovercraft, the identification of autonomous vessels would be useful for this.

One of the main points to take away from this symposium was that 'autonomous' no longer means fully unmanned, if it ever did. It is a question of degrees, dependent upon technological limitations and economic factors.

Many speakers agreed that new technology could be beneficial for increasing situational awareness and improving safety, and shipowners and governments must recognise the importance of equipping vessels in this way.

Finally, it is likely that technological change will render obsolete the structures and organisations that we have today, and we must not let the opportunity slip to shape the future rather than be overtaken by events.