Welcome to the Nautilus Telegraph's monthly book reviews - a unique service bringing you the latest maritime releases from specialist and mainstream publishers.

You can buy the books reviewed on these pages in the Nautilus Bookshop - our partnership with the Marine Society that means any profits from sales go towards the charity's seafarer education services. Just click on the BUY NOW button at the end of the review. Each month, one of our reviewed books is designated Book of the Month, and will be sold at a special price in the Nautilus Bookshop during that month. 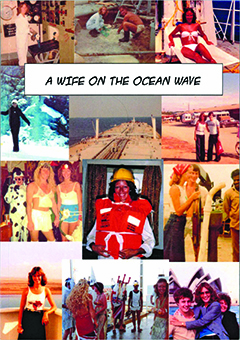 Texaco Overseas Tankship Ltd was the UK based tanker operating company of the American oil giant. Formed in 1950 its fleet of product tankers transported oil and oil products around the world.

By 1974 its British flagged fleet would reach 30 ships, and it was not long after this that Carole Goldsmith arrived onboard the 23,000 tonne Texaco Rome for first time accompanying husband and third officer Andy Goldsmith.

A Wife on the Ocean Wave is a memoir of Carole’s early years of marriage travelling the world, taken from diaries and letters written to parents over a five-year period.

Each chapter is divided by tours of duty, and over five years our plucky pair gad about the world exploring North and South America, the Middle East, Far East and Australia, Europe and Africa.

What strikes you about this story is the sense of community onboard. Set as it is just before the grinding economies of scale made every job and every action about efficiency, there is a relaxed and collegiate atmosphere. Carole often helps with odd jobs, turning her hand to painting, repairing, sewing, paperwork and eventually engineroom and deck support.

Of course, Carole has a lot of adventures and a few hijinks during her time at sea. She may have joined as a wide-eyed wife, but she left as a self-composed young woman.

Unfortunately for Texaco Ocean Tankers, not long after our story ends, commercialisation and low oil prices finally forced its American parent to divest of ship ownership in favour of chartering under management.

It’s unlikely that Carole’s story would be the same had she joined a ship post 1980s. For one thing it’s a lot less common to see spouses onboard. For even if they are allowed there’s no longer as much opportunity for down time or shore visits.

And that’s a shame, because if it were possible to regain some of the joie de vivre from this time onboard today’s tankers, they would undoubtedly be a much nicer place to spend eight months of every year.