Navigating the icy water of the polar regions

With more and more ships operating in icy waters, the industry needs to be sure that crews are prepared properly for this challenging work. Former member of the Nautilus professional and technical team NATACHA SOUTHWELL therefore carried out a survey of ice navigators to determine whether the regulatory training requirements match the practitioners' opinions of the skills, knowledge and experience needed…

The continuing decline of sea-ice cover is increasingly opening up polar regions to maritime operations – mostly in ﬁsheries, mineral, oil and gas exploitation, shipping services and as a destination for a growing specialised cruise sector.

However, in spite of the decline in sea-ice, extreme variability in ice, temperature and weather conditions continue to present signiﬁcant navigational challenges to mariners. Seafarers with ice navigation expertise therefore continue to be a necessity for safe polar operations.

The Arctic region is globally recognised as an environmentally sensitive area, yet the region is witnessing an increased interest in the viability of shorter transit routes – as recently demonstrated by Venta Maersk, the ﬁrst containership to complete a passage through the Northern Sea Route (NSR).

It is therefore reasonable to expect that the next half century will see a gradual growth in shipping trafﬁc in the NSR, the North West Passage and subsequently the Trans-Polar Route. Both all-year and seasonal ice maritime operations will continue to present signiﬁcant safety and environmental risks.

Despite these developments, there has been very little focused industry or academic research into the role of ice navigators in providing safe navigation in ice-covered waters. The idea for my master's degree research emerged from reading numerous articles on polar ship operations but encountering very little in the way of in-depth reports on the skills and experience of ice navigators. 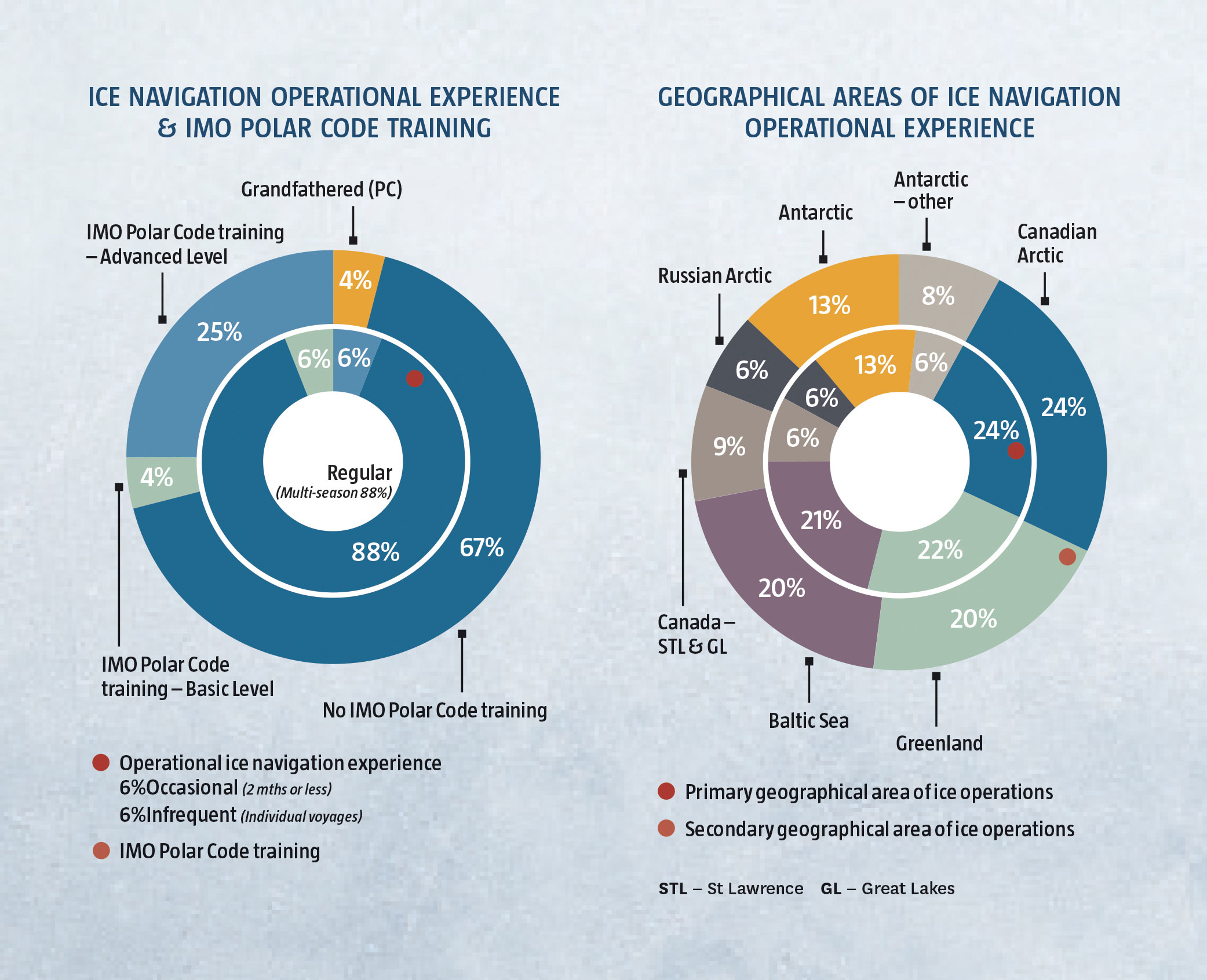 I wanted to explore this gap, against the background of a rapidly changing technological environment. The research drew upon three strands: deck ofﬁcer skills and experience set against the recent implementation of the IMO Polar Code; the human element; and current and emergent technological aspects of ice-covered maritime operations.

Central to the research was a survey completed by 48 deck ofﬁcers – 82% of whom were ice navigators and 22% ice pilots. Their seagoing service included merchant vessels, icebreakers, research ships and naval ships, and 88% had regular multi-season experience of working in ice-covered vessels.

Although the main geographical ice navigation areas were centred around the Canadian Arctic, Baltic and Greenland, most participants bore out the highly mobile and diverse nature of ice navigation – with operational experience gained globally in the Arctic, Antarctic and Baltic Sea regions.

More than 60% of the participants had received IMO Polar Code training, and 89% viewed the implementation of the current mandatory Polar Code two-tiered SOLAS training requirements in a generally positive manner.

However, the omission of actual practical in-ice experience and competence requirements in Chapter 12 of the Polar Code was regarded by 53.5% of the survey respondents as being a major area of concern for future safety.

Many respondents remarked on the importance of the ability to recognise different types of ice and to interpret ice conditions. This is of particular importance given the wide variability of ice conditions encountered from year to year, time of year and geographical operations.

The integrated use of marine simulators in Polar Code training was viewed positively by 52% of respondents – although cautions were voiced about the extent to which simulators can replace practical ice navigation experience at sea.

The survey comments highlighted the importance of skills such as patience and prudence in achieving safe manoeuvring in ice – with several respondents noting the importance of gaining a 'feel' and having a respect for ice.

Part of my research aimed to explore the inﬂuence and application of existing and future technological systems, and much of the survey feedback expanded on the importance of harmonisation and enhancement of existing navigational systems in the ﬁrst instance. Almost one-quarter of respondents said they thought the automatic integration of ice forecasts into an ENC platform would be very useful, while 61% saw it as marginally useful. Almost three-quarters saw a potentially positive impact on safety from the use of an automatic ice detection system, in conjunction with an ice classiﬁcation system.

A wide range of views were expressed on emergent technologies such as forward and upward looking sonar systems for ice monitoring and unmanned aerial vehicles for tactical navigation support. The use of drone technology for timely aerial imagery was considered by 77% of respondents as having the potential to signiﬁcantly or relatively enhance safety in ice-covered waters in the next decade.

The survey also identiﬁed some of the constraints experienced by ice navigators – including issues with data connectivity, concern over availability of icebreakers, commercial pressures, and insufﬁcient hydro-meteorological data.

Several respondents noted bandwidth limitations as an issue for vessels operating in high latitudes – with availability of updated accurate ice and weather forecasts being a recurrent comment. Inadequate coverage of areas surveyed to modern hydrographic standards was seen as a signiﬁcant issue by 52% of participants, and concerns were also raised over the suitability and capability of vessels in ice-covered areas, the combined crew experience, and knowledge of the design limits and ice strengthening of the vessel.

The importance of appropriate manning levels and watchkeeping schedules was raised by many respondents, who highlighted the issue of fatigue for watchkeepers as a consequence of the intensity of operations in ice.

I hope this study has contributed in a small way to an understanding and a better appreciation of the signiﬁcance of deck ofﬁcer training, skills and competence requirements for maritime operations in ice-covered waters.

The ﬁndings demonstrate a contrast between the regulatory requirements for training and competency and the actual expectations of ice navigation competency and skills. However, at this stage it is too early to determine whether or not the Polar Code training requirements will prove to be sufﬁcient to improve overall safety not only in polar regions but also in other ice-covered waters.