As the maritime community marked Merchant Navy Day around the UK on 3 September 2019 (see end of page), Plymouth had a particular milestone to celebrate, with the unveiling of a new Merchant Navy Monument. Andrew Linington reports

Plymouth claims the title of 'Britain's Ocean City' and this year’s Merchant Navy Day saw the culmination of a long struggle to ensure that it pays an appropriate tribute to its merchant seafarers.

A big crowd gathered on Plymouth Hoe to see the Princess Royal unveil Plymouth's Merchant Navy Monument – three granite blocks, each weighing more than four tonnes, topped by a 7ft high sculpture of a seafarer looking out to sea.

The dedication of the memorial was the climax of a five-year fundraising campaign which had been fuelled by long-standing concerns about the lack of proper recognition for the huge sacrifice made by civilian crews during conflicts.

Lord Mayor Richard Ball reminded the audience that more than 50,000 merchant seafarers and some 22m tons of shipping had been lost during the two world wars. 'Monuments shed light on forgotten heroes,' he added. 'Those who we might not know, but to whom we owe a debt of gratitude.'

Vivien Foster, who chaired the fundraising committee, said it was highly appropriate that the monument was being unveiled 80 years after the Donaldson liner Athenia was torpedoed by a U-boat at the start of the Second World War, with the loss of 112 passengers and crew. 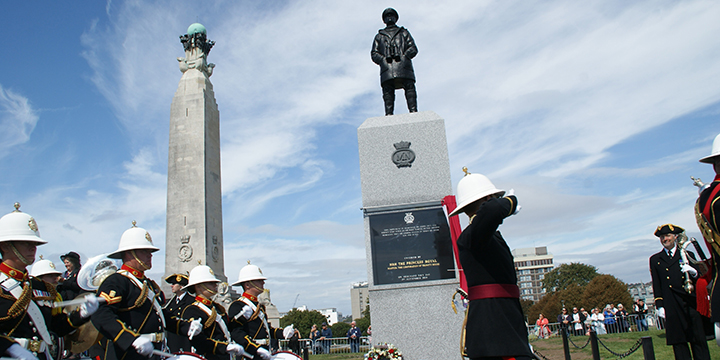 Even though Churchill had referred to the Merchant Navy as the fourth service, the vital contribution of merchant seafarers and fishing vessel crews in keeping the country supplied had never been fully acknowledged, she added. 'We owe our freedom today to their combined efforts,' Ms Foster stressed.

The Princess Royal said she was honoured to be unveiling the monument. 'Sadly,' she noted, 'it seems it has taken a while to get this memorial – partly, I fear, because it reflects a slight lack of awareness about the valuable role the Merchant Navy not just played but continues to play, contributing to free trade and the life and economy of our nation, often in the most difficult and dangerous conditions.

Seafarers 'an asset to the nation'

'Seafarers continue to be an incredibly important asset to our island nation and they are the lifeblood of our maritime sector,' she added. 'It is therefore fitting that in the ocean city of Plymouth a memorial to the Merchant Navy should stand alongside that of the Royal Navy personnel who have their lives for our country.'

Princess Anne said it was not only right to remember the past but also to look to the future. 'I hope today will help to increase the awareness and importance of this very special group of people in the Merchant Navy and fishing fleets,' she added.

It took more than 40 years after the Second World War for the Merchant Navy to be officially represented at Plymouth's Remembrance Day events at the Naval War Memorial. The idea of erecting a statue of a seafarer had first been suggested in 1995, but plans failed to progress beyond the design stage.

A small commemorative memorial to the MN had been set within a wall of the Plymouth Barbican in 1996, but services of remembrance there were frequently disrupted by passing traffic and pedestrians.

The campaign to build a monument on Plymouth Hoe got under way in 2014 and received a major boost in 2016 with a £75,000 award from the Libor Fund, which was built up through fines on banks that had manipulated foreign exchange markets.

'It's what we all wanted'

Plaques on the granite plinth pay tribute to the important role of the Merchant Navy and fishing fleets in war and peace, stressing the dangers faced by crews, and the country’s dependence upon shipping.

The sculpture of a seafarer – titled The Watchkeeper – which tops the monument was modelled on a small statuette produced in the 1970s by Bill Favata, a lecturer in seamanship, and cadets at Plymouth's School of Navigation.

Former National Union of Seamen official Baz Gregory was part of the fundraising campaign team. 'This is a really happy day for us,' he said. ‘It’s what we all wanted.

'The first £10 was collected on this very tarmac and they laughed at us – saying we would never make it. But we did, and it’s wonderful to see the Merchant Navy being recognised in this way at long last.'

While the Princess Royal was dedicating the Plymouth Merchant Navy Monument, the red ensign was being flown around the UK in celebration of Merchant Navy Day. Nautilus members have sent in pictures of MN Day events and flags flying in their home towns - see below.

Nautilus members around the UK are celebrating Merchant Navy Day today, encouraging their local councils to fly the red ensign in recognition of merchant seafarers’ contribution to the country – in times of peace and war alike.