Have your say: is wrong-size personal protective equipment putting seafarers at risk?

Nautilus is encouraging members to take part in Solent University research to uncover the dangers of poorly-fitting personal protective equipment – and find out who is most likely to be affected. Sarah Robinson reports on an online survey that seeks to shake up the shipping industry

Have you ever wished your personal protective equipment (PPE) was a better fit?

Helen Devereux has. Now a maritime researcher at Solent University, Dr Devereux used to be a deck officer on deepsea tankers, where there weren't many protective work boots available for the smaller seafarer.

'I have particularly small feet,' she acknowledges, 'but this wasn't just about me, or just about female crew members. Male Filipino seafarers also tended to take smaller shoe sizes, but the default sizes available onboard tended to be based on the averages in the northern European countries where the shipowner was based.'

It could take six weeks for the right size of boot to be sent to the vessel – which is a long time to have crew safety compromised by poorly-fitting equipment. And although many others could tell a similar story, the issue tends to get put to one side when you're busy getting on with your work at sea.

Recently, however, Dr Devereux's memory was jogged when she read a report on the dangers of wrong-size PPE issued by CHIRP, the Confidential Human Factors Incident Reporting Programme. It was time to do something about it.

The researcher realised that more data was needed if shipping companies were to be convinced of the need to offer a more suitable range of PPE sizes and fits. With backing from CHIRP, she and her colleague Dr Emma Wadsworth devised an online survey where seafarers around the world could share their experiences of using PPE.

The survey is online now at solent.onlinesurveys.ac.uk/ppe and due to run at least until the end of April, with the data to be collated into a report this summer and put to practical use.

'With this survey we're going to raise awareness of the issues associated with PPE, and we hope that shipping companies and regulators sit-up and take notice,' says Dr Devereux.

The involvement of CHIRP

Howard Nightingale of CHIRP says that the first time he had really thought about the dangers of poorly-fitting PPE was when his organisation was approached for comment last year by the Women in Maritime Taskforce – a UK cross-industry body of which Nautilus is a member.

'I must confess I didn't realise how much of an issue this is,' says Mr Nightingale, 'although when I thought about it, I did recall seeing Filipino colleagues onboard ship swamped by PPE that wasn't meant for their smaller stature. Nobody complained, because that's just the way it was. I guess that the ships stocked large sizes because of the logic that a small person can get into a large boiler suit or pair of boots, but a large person can't get into small ones.'

Mr Nightingale and his colleagues at CHIRP felt that they couldn't comment on the Women in Maritime Taskforce's question about PPE for female seafarers, so they organised an information-gathering exercise to see what some women at sea thought about the issue. 'I was struck by the strength of the responses,' he says. 'The problems the female seafarers reported with firefighting equipment were especially concerning.'

The results of the exercise were published in a CHIRP Insight Article dated 19 November 2019, which can be viewed in the Publications section of the website www.chirpmaritime.org.

The conclusions of the article are as follows:

CHIRP Maritime would argue that there is clearly an issue that needs to be recognised and addressed by employers if women are to be respected in the workplace and treated as equals.

The MCA have recently updated their PPE Merchant Shipping Notice M1870 with Amendment 1, which provides for updated safety standards. It should be noted that employers are required to ensure that PPE is to be provided to employees where they are at risk from a hazardous work activity. Unsurprisingly, nowhere do regulations or shipping notices mention that PPE should increase the risk!
The Code of Safe Working Practices devotes a full chapter to PPE – one salient section is repeated below. Suitable equipment should:

A quick internet search reveals that there are manufacturers who supply female-specific personal protective equipment – all BS, EN, and ISO compliant as applicable (although they may lack company logos on helmets and boiler suits). Nevertheless, the correct equipment is available on the market. The challenge is to increase awareness in order for it to become readily available onboard merchant vessels.

It was after reading this that Helen Devereux came up with the idea of Solent University carrying out a larger-scale academic study on the subject – and for all seafarers, not just women. An online survey is being used to gather data for the study because of its international reach and potential for recruiting large numbers of participants.

As well as being discussed here, the survey is being promoted by CHIRP in its quarterly newsletter Maritime Feedback, which is regularly distributed in hard copy with the print edition of the Telegraph. Maritime Feedback is also available on the CHIRP website translated into Chinese, Portuguese and Filipino, so it is hoped that this will encourage seafarers from those countries to take part.

'The more people who complete the survey, the more weight the findings will carry, Dr Devereux stresses. 'It's OK knowing it all anecdotally, but just talking about this amongst ourselves doesn't necessarily drive change. We also need to assess the scale of the problem, so we need everyone who hears about this to join in, male or female, whatever your nationality and whether or not you've had trouble with the fit of your PPE.'

To make your contribution to the Solent University research, go to solent.onlinesurveys.ac.uk/ppe.

The survey is designed to work well on smartphones and tablets, and takes 15 minutes to complete. 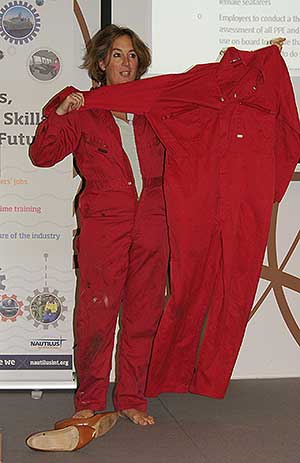 Poorly-fitting PPE has been a talking point amongst Nautilus members for many years.

Council member Jessica Tyson (pictured) changed into a boiler suit to highlight the problems of the 'one size fits all' approach to PPE and emergency equipment. She moved a motion warning that a lot of PPE is manufactured to traditional specifications – often meaning it is not suitable for the increasing number of female seafarers.

However, she stressed, the issue affects all seafarers. 'If you are tall or short, and the equipment does not fit properly, it can be dangerous as you are not able to focus on the job you are meant to be doing, ' Capt Tyson added.

'We are all different and there should be some understanding of this in the equipment that we have,' she argued. 'There is a danger that people will not want to use the kit if it makes them feel uncomfortable. '

Seconding the motion, Samantha Belfitt told how she had to wear size 10 fire boots, when her shoe size is four. 'Every time I walked up and down, the boots fell off, ' she recalled.

The meeting gave unanimous support to the motion, which calls for PPE suppliers to design and provide equipment that is fit for purpose and suitable for all seafarers. It also calls for employers to carry out a full risk assessment of all PPE and emergency equipment onboard to ensure that all crew members can use it safely.

The power of data

Collecting missing data as a means to drive change is not a new idea, but it has achieved prominence in the last year thanks to the publication of Invisible Women by Caroline Criado Perez.

This award-winning book aims to 'expose data bias in a world designed for men', and investigates a range of issues where women are put at risk of harm by default standards based on incomplete information.

This includes medicines that have only been tested on male volunteers, town-planning policies that ignore the needs of young mothers, and body-worn equipment that doesn't fit women properly.

All soldiers are required to carry heavy loads, she continues, but backpacks designed for men can be harmful for women. Studies suggest that on women, the packs are unstable, pistol belts fit poorly and straps are uncomfortable. Men's upper body strength is on average 50% higher than women's, and women 'compensate for packs built around typically male body strength by hyperextending their necks and bringing their shoulders farther forward, leading to injury,' Criado Perez points out. But once we are aware of this, there are straightforward measures that can be taken, such as supplying packs with a well-padded hip belt to allow a better transfer of the load to the leg muscles.

The author also looks at personal protective equipment (PPE), turning to the UK's TUC union federation to uncover examples of problems with the fit.

Wrong sizes are a common complaint in sectors such as policing, Criado Perez finds, but as in the army, wrong shapes are a problem too. For example: 'British female police officers report being bruised by their kit belts; a number have had to have physiotherapy as a result of the way stab vests sit on their female body; many complain there is no space for their breasts. This is not only uncomfortable, it also results in stab vests coming up too short, leaving women unprotected. Which rather negates the whole point of wearing one.'

This is reminiscent of the initial findings of the CHIRP information-gathering exercise among female seafarers, so it appears that women in different sectors are saying much the same thing. It is hoped that the Solent University study results in all their voices being heard more clearly – and those of the apparently 'non-typical' men who also suffer from poorly-fitting PPE at sea.